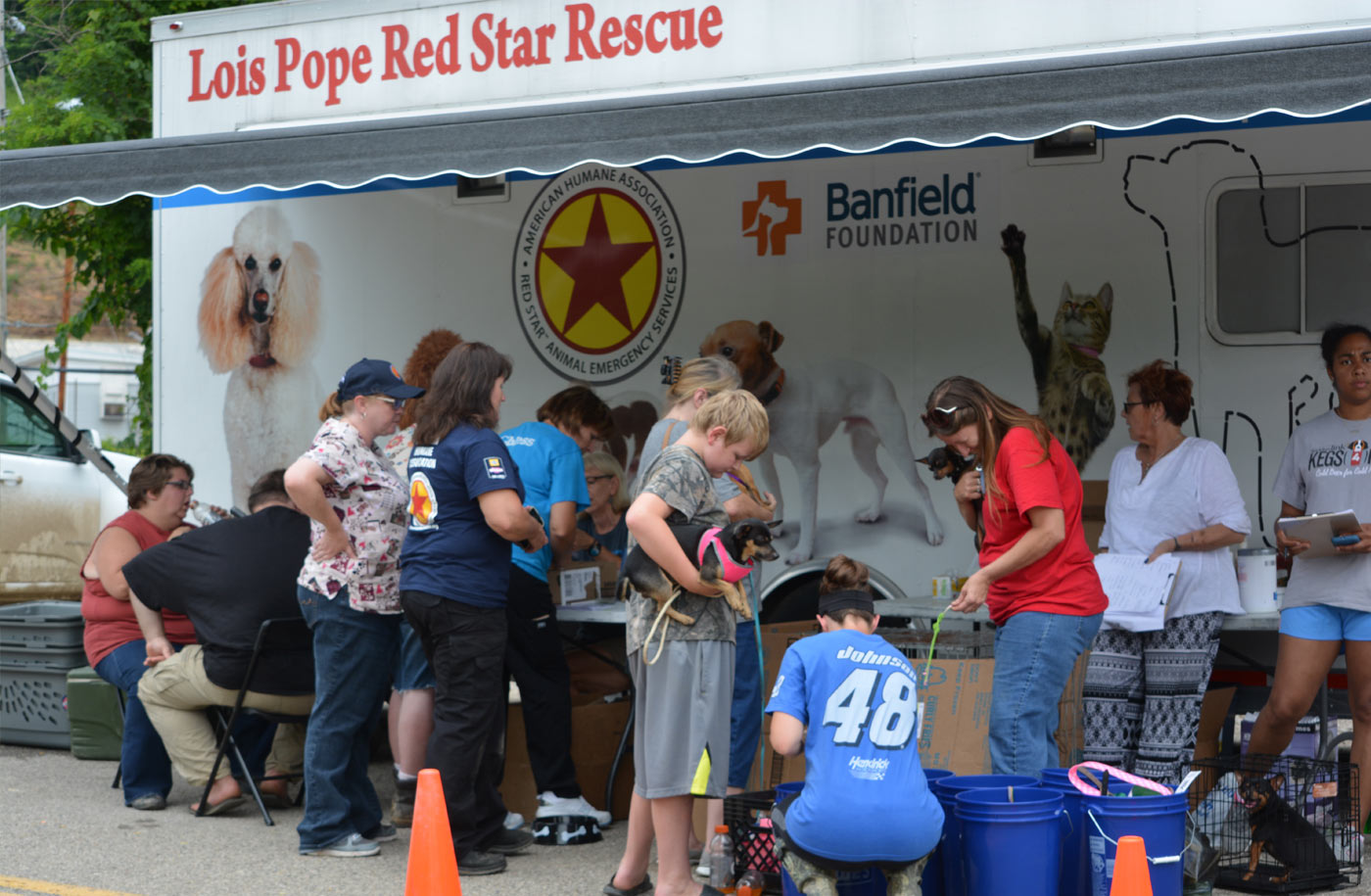 Posted at 15:00h in News by lifeadmin

Thousands of animals caught in the devastating flooding in West Virginia are being given the life-saving gifts of help and hope today, thanks in large part to local philanthropist Lois Pope. The longtime supporter of American Humane Association has funded several giant 50-foot-long animal rescue vehicles, one of which rushed to the scene with a corps of 10 highly trained volunteers and animal doctors to provide rescue services, veterinary care, food, and love to the lost, abandoned, and relinquished animals whose owners’ homes have been destroyed.

The Lois Pope Rescue Vehicle is serving several critical needs: as a base of operations during the initial needs assessment, as a mobile veterinary clinic to provide first aid, conduct wellness checks, and administer vaccines; as a distribution point for 1,200 pounds of food; and for providing critically needed supplies, vaccines and medicines donated.
To date, more than 1,000 animals, including dogs, cats, and wildlife have been helped and more are coming in for assistance every day. The vehicle’s work as a mobile veterinary clinic is proving doubly vital, as emergency surgery was performed by American Humane Association animal doctors on a Golden Retriever named Jake who had been shot through the hind legs. Thanks to these resources, Jake survived the terrible wound and is doing well. A baby fawn whose mother died was in shock and needed immediate care. She was revived. These are just a few of the hundreds of heartwarming stories coming in from the deployment.

“We and the thousands of animals who cannot speak for themselves cannot thank Lois Pope enough,” said Dr. Robin Ganzert, president and CEO of American Humane Association. “Because of her vision and steadfast support, our emergency rescue team is ready to deploy wherever and whenever animals are in need. On behalf of America’s most vulnerable who cannot wait when disaster strikes, thank you!”

About American Humane Association and its animal rescue program
American Humane Association is the country’s first national humane organization, founded in 1877. Its
animal rescue program was created in 1916 at the request of the U.S. Secretary of War to rescue war horses on the battlefields of World War I Europe. Since then, it has been rescuing animals of every kind and have been involved in virtually every major disaster relief effort from Pearl Harbor to 9/11, Hurricane Katrina, the Joplin, Missouri and Moore, Oklahoma tornadoes, the Japanese and Haitian earthquakes, and Superstorm Sandy. Over just the past ten years American Humane Association’s rescue teams have saved, helped and sheltered more than 80,000 animals. For more information or to support rescuing animals in need, please visit www.AmericanHumane.org.