One of America’s Leading Philanthropists 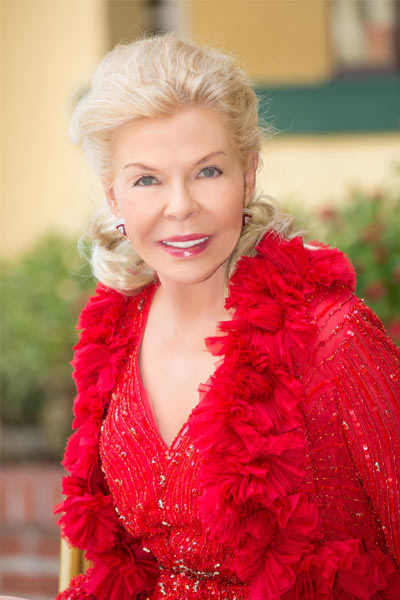 Lois Pope, one of America’s leading philanthropists, is recognized as the country’s foremost advocate for veterans and especially disabled veterans, earning the moniker, “The Pope of Disabled Veterans.” She created and spearheaded the legislation, building, and endowment of the American Veterans Disabled for Life Memorial, which was dedicated on October 5, 2014, in Washington DC as the nation’s first permanent public tribute to the four million living disabled American veterans and all those who have died.

Realizing that not everyone can travel to Washington DC to experience the power of the Memorial in person, Mrs. Pope worked with members of Congress to pass a resolution in 2016 declaring October 5 as a “National Day of Honor” for America’s disabled veterans.  Moreover, she conceived, funded, and is the executive producer of two widely acclaimed PBS films about disabled veterans — “Debt of Honor” and “VA: The Human Cost of War,” both directed by six-time Emmy Award winner, Ric Burns.  The former illuminates the plight and treatment of disabled veterans throughout American history, while the latter sheds light on the controversial history and problems that have plagued the Veterans Administration.

Combining her unparalleled commitment to disabled veterans with her ardent support of animal welfare, Mrs. Pope worked with Congress to require that military working dogs be brought back to U.S. soil so they can reunite with their human soldiers and continue to support each other on both ends of the leash.

Dogs that have served in the five branches of the military now have a permanent physical tribute to their courage, thanks to Mrs. Pope’s endowment of the American Military Hero Dog Monument, located at Tri-County Animal Rescue in Boca Raton.  The monument, which was created in partnership with American Humane, was dedicated May 15, 2021. Through a contest in partnership with the Palm Beach County School District, two area children won the opportunity to name the Hero Dog: “Caman Valor.” In partnership with American Humane, Mrs. Pope created the K9 Medal of Courage, the highest honor given to military service dogs, which is awarded annually in a Capitol Hill ceremony.

She also created the Pups4Patriots initiative, within the Lois Pope Center for Military Affairs at American Humane. This program takes dogs primarily from shelters and provides them with specialized training as therapy dogs. They are then given free of charge to veterans suffering from PTSD and other traumatic brain injuries.

Mrs. Pope has also been the presenting sponsor of American Humane’s annual Hero Dog Awards for the past 11 years, and a benefactor of the organization’s legendary Red Star Rescue mobile hospitals.  Within American Humane, she is known as the “First Lady of Compassion.”

Her love and advocacy of animal welfare inspired Mrs. Pope to give $1.5 million to the Tri-County Animal Rescue. It is the largest single donation the organization has ever received and will endow its new 9,000-square-foot veterinary center.  It is the first center in the region specifically geared to providing low-cost, or free veterinary care to low-income families for their pets.

Another film project that is demonstrative of her love for dogs is called, “Made for Each Other” and it explores the primordial relationship between dogs and human beings.  The film was produced and directed by Ric Burns and Bonnie Lafave of Steeplechase Films. Mrs. Pope is the Executive Producer and chief creative partner.

With the impact of the COVID-19 pandemic on her mind, and especially how it has affected needy children close to home, Mrs. Pope made a $1 million donation to the Palm Beach County Food Bank to endow its meal program for the one in five food-insecure kids in the county.  In gratitude, the Food Bank renamed the program Lois’ Food4Kids.  Since its inception, thousands of underserved children have now received healthy and nutritious meals when they are not in school – weekends, holidays, vacations, and other school closings.  In addition, Mrs. Pope provided the funding to the Food Bank for a new refrigerated trailer to enhance its ability to store and provide more perishable goods to those in need.

Spurred by the heart-wrenching images of Ukrainian refugee children fleeing their homeland, Mrs. Pope donated $1 million to Save the Children, the global humanitarian organization working to meet the needs of children and families fleeing the escalating violence in Ukraine. The gift established a fund called Lois’ Care for Refugees and is earmarked specifically for children impacted by the Ukraine crisis by providing them with food, water, hygiene products, medicine and other humanitarian assistance.

Mrs. Pope is the driving force behind the establishment of the Lois Pope LIFE Center at the University of Miami School of Medicine, home to the Miami Project/Buoniconti Fund to Cure Paralysis, the world’s foremost center for research, treatment, and services for paralysis and other neurological diseases.

Mrs. Pope has given $12 million to Bascom Palmer Eye Institute to create the Lois Pope Center for Retinal & Macular Degeneration Research at Bascom Palmer’s Palm Beach Gardens, Florida campus.  The largest gift ever received by Bascom Palmer, it was made in memory of Mrs. Pope’s mother, who suffered from macular degeneration prior to her death.

Her beneficence has also provided scholarships to low-income teens who aspire to be community medical doctors, summer camp experiences for thousands of underserved children, a clean water system for a village in Guatemala, support for African women who were victims of genocide, and many other initiatives helping the voiceless and vulnerable in society.  Moreover, she has donated 14 ambulances to Magen David Adom, Israel’s emergency response service. She is the largest non-Jewish donor to the organization.

Many organizations have bestowed honors and awards on Mrs. Pope in recognition of her generosity and humanitarian endeavors.  These organizations include: Florida Atlantic University, Miami Project / Buoniconti Fund to Cure Paralysis, Greater Miami Chamber of Commerce, Ellis Island Foundation, Rabbinical College of America, Magen David Adom, Veterans of Foreign Wars, and Albert Einstein College of Medicine. Most recently, Mrs. Pope was named a Woman of Distinction by Palm Beach Atlantic University and inducted into the Golden Baton Society of the Palm Beach Symphony.  She was named a Daily Point of Life recipient by President George W. Bush, and former Secretary of State Colin Powell appointed her to the board of the Colin Powell Center for Policy Studies at City College of New York (now the Colin Powell Center for Civic and Global Leadership).  She also serves or has served on the boards of the Foreign Policy Association, University of Miami, Palm Beach Opera, Armory Arts Center, and Florida Atlantic University.

A mother, grandmother, and great grandmother, she has rescued many dogs and cats.  A resident of Manalapan, FL., she has trained for and completed five marathons.

To learn more about Lois Pope and her various foundations, visit www.life-edu.org.