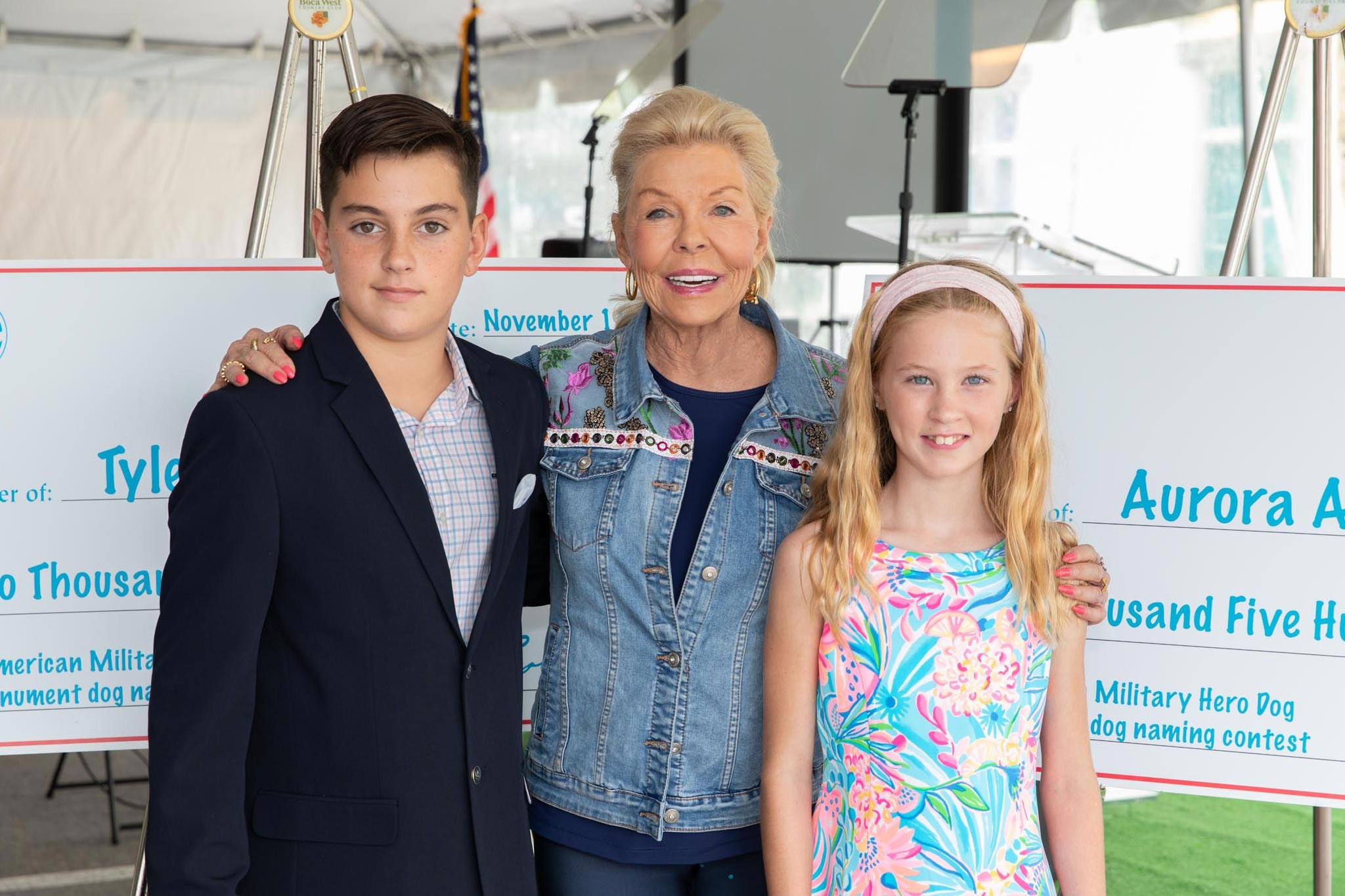 Posted at 13:52h in News by lifeadmin

PHILANTHROPIST LOIS POPE AWARDS WINNERS $2500 EACH, PLUS $2500 FOR THE TWO WINNING SCHOOLS IN VETERANS DAY CEREMONY

Aurora Ashcraft, a fifth-grader at Jupiter Elementary School in Jupiter, and Tyler LeClair, a seventh-grader at Eagles Landing Middle School in Boca Raton, have been selected as the winners of the dog-naming contest for the American Military Hero Dog Monument.

LeClair picked the name Caman, explaining in his video entry that “each letter of the name represents a branch of the Armed Forces:  C represents Coast Guard, A represents Air Force, M represents Marines, A represents Army, and N represents Navy.  That’s why I think Caman is the best name for this hero dog monument.”

Ashcraft chose the name Valor, explaining in her video entry that, “valor means having great courage in the face of danger, especially in battle” and that “all the military dogs who have helped in America’s wars and battles have loyalty, bravery, companionship, and most if all, valor.”

In a ceremony on Veterans Day, Nov. 11, 2021 at the Tri-County Animal Rescue, the site of the monument, the two winners were saluted by philanthropist and nationally-recognized disabled veterans advocate Lois Pope of Manalapan.

Mrs. Pope, who conceived and commissioned the creation of the monument in partnership with American Humane, and then created the contest in conjunction with the Palm Beach County School District, presented each winner with a check for $2500.  The students’ schools were also each presented with a $2500 check. 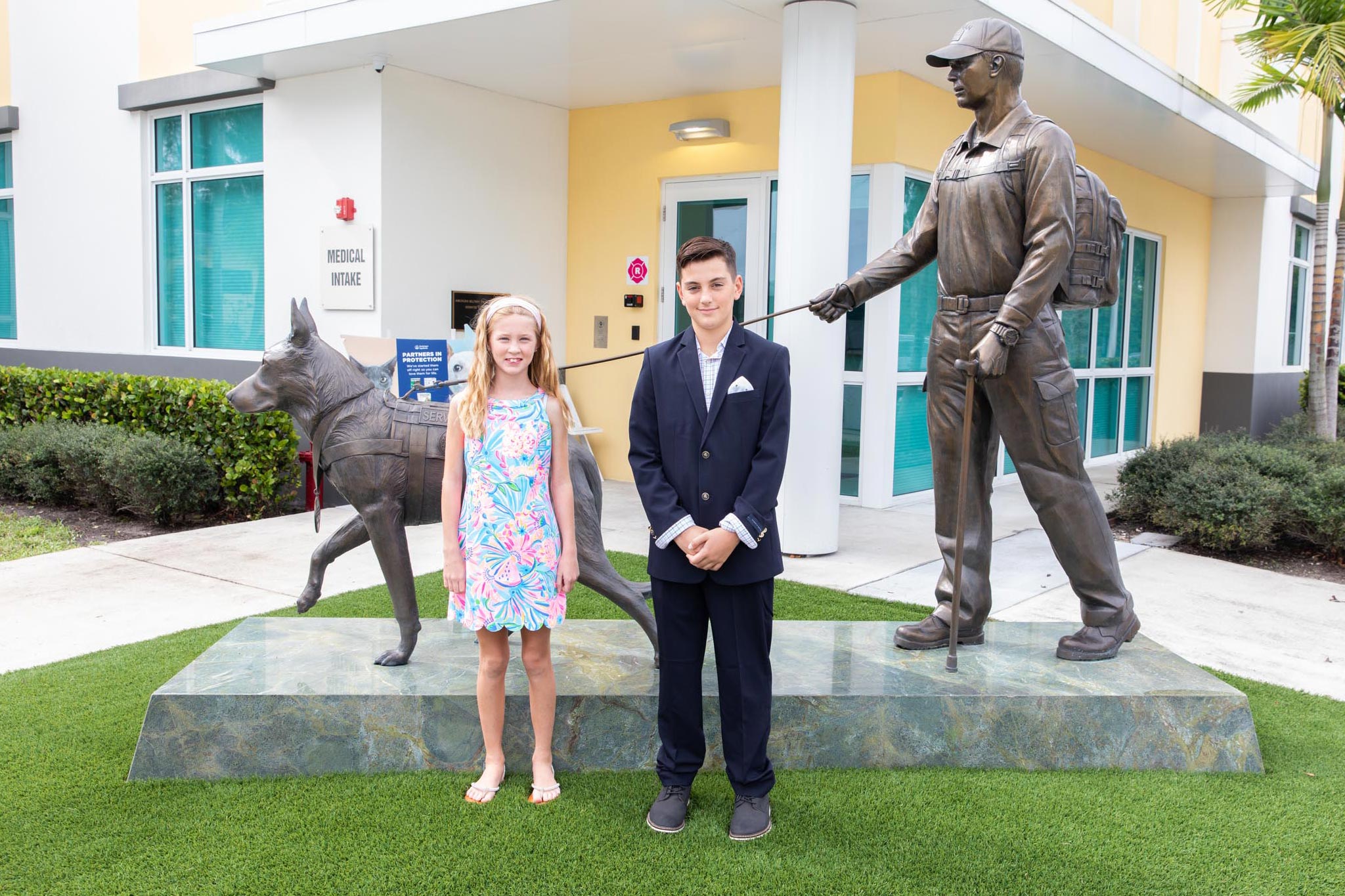 “This monument represents the unbreakable bond between the courageous canines and the valiant warriors who have served alongside each other in our Armed Forces,” Mrs. Pope said. “It is also a celebration of heroes – those on two and four legs, those with hair and those with fur.  And it is a teaching tool – to educate people, from elected officials to the general population, that heroes come at both ends of the leash.”

Mrs. Pope explained that military working dogs do so much, from carrying out lifesaving missions and detecting explosive devices, to searching areas that their human handlers cannot get to and providing companionship, not just in the cauldron of war but long after the battle is over.

“A great way to show them respect was to give the dog on this monument a name deserving of the service and sacrifice they have made.  So the dog’s name will be Caman Valor.”

The dog-naming contest, which was open to all elementary and middle school students in the Palm Beach County Public School District, received 125 entries.  The judges were Mrs. Pope; monument sculptor Austin Weishel; Robert C. Miller, a Board member of the Lois Pope LIFE Foundation; Dr. Robin Ganzert, president and CEO of American Humane; and Diana Fedderman, the school district’s Assistant Superintendent for Teaching and Learning.