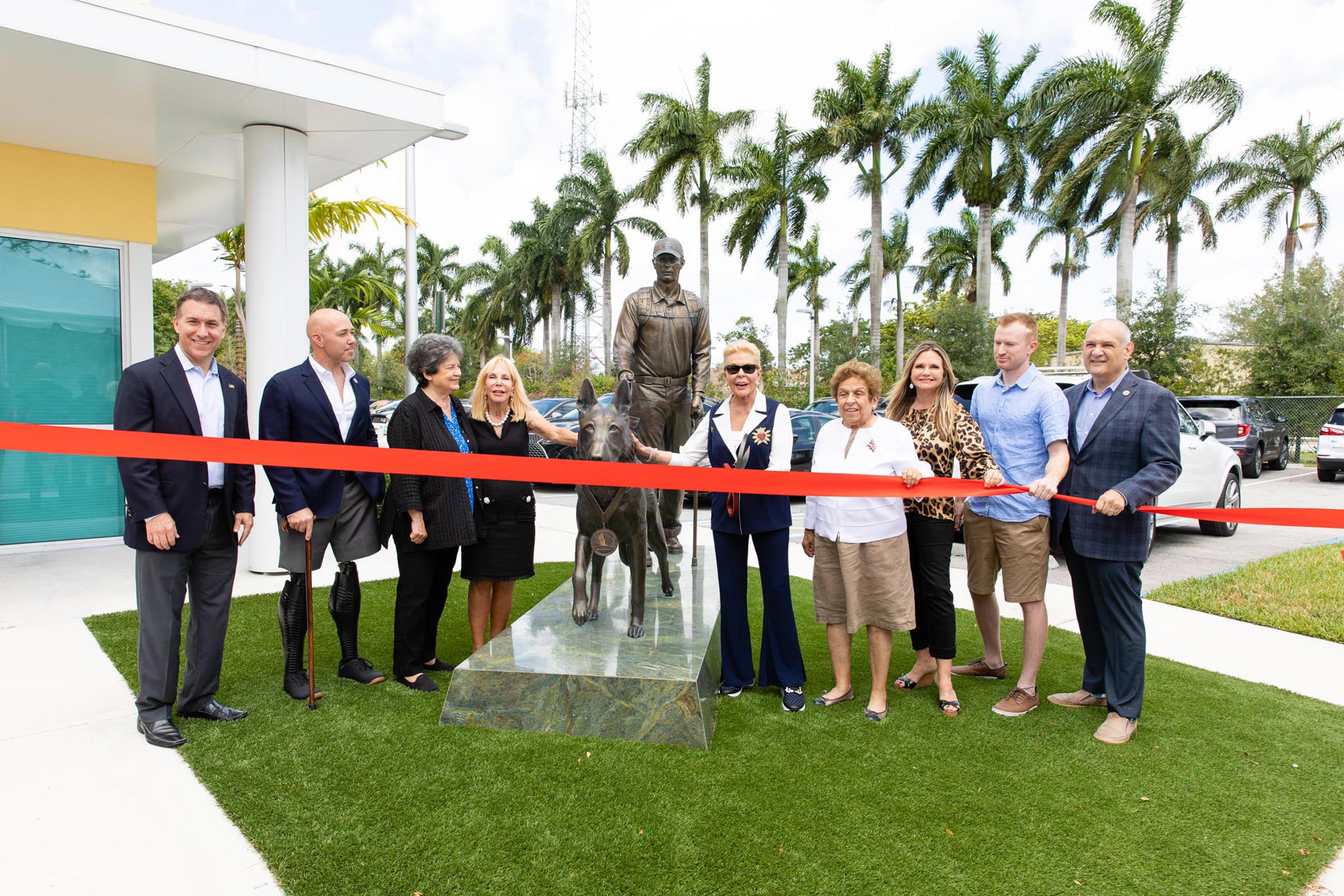 Posted at 16:07h in News by lifeadmin

There are some 2,700 dogs currently in active military service and about 700 who are deployed overseas, according to the U.S. Department of Defense. But for the most part, these courageous canines – like the countless thousands who served in the military dating back to the Civil War – have not been given the credit due to them for their heroic acts on and off the battlefield.

Lois Pope, the nationally prominent philanthropist and disabled veterans and animal welfare champion, changed this by bestowing upon military service dogs the honor they deserve. She and Dr. Robin R. Ganzert, president and CEO of American Humane, the country’s first humane organization, dedicated the American Military Hero Dog Monument on Saturday, May 15, at Tri-County Animal Rescue in Boca Raton, FL. The American Military Hero Dog Monument is a national tribute to the canines who serve in the five branches of the Armed Forces.

“There are 4.2 million living American veterans who have permanent physical and/or psychological disabilities, and they now have a memorial in Washington, D.C. to recognize their service and sacrifice,” Mrs. Pope said, referring to the American Veterans Disabled for Life Memorial which she created. “But dogs have also served and sacrificed alongside our troops in wars and conflicts around the globe for more than a century. While a handful of these animals have been decorated, I felt it was time that they, too, had a permanent monument to honor them for their heroism.”

Just as the disabled veterans memorial stands not just as a tribute but also as an educational resource,  Mrs. Pope hopes the American Military Hero Dog Monument will “educate people of the essential role that dogs have undertaken in service to America and to remind us that bravery in uniform comes on both ends of the leash.”

“On the battlefield and off, our four-legged heroes have proven time and again they are our warriors’ best friends,” said Dr. Ganzert. “From highly trained war dogs who save lives on the front lines of freedom to lifesaving service dogs who help our veterans win their battles with Post-Traumatic Stress and Traumatic Brain Injury here at home, we owe these courageous canines a deep debt of gratitude. I was honored to join Lois Pope in dedicating this permanent tribute recognizing their invaluable service to our armed forces and our nation.”

The American Military Hero Dog Monument was designed by prominent sculptor Austin Weishel, whose bronze works include the National Fire Dog Memorial in Washington D.C.; The Fallen Shield, honoring police who have died in the line of duty, in Modesto, CA; and the Colorado Law Memorial, which includes a beam from one of the World Trade Center towers that fell on Sept. 11, 2001.

Mr. Weishel explained the monument, which resulted from a national design contest, was created “to honor the everlasting and unbreakable bond between canines and the valiant warriors of our armed forces. Moving forward together as a team, this sculpture pays tribute to their work and the lifesaving connection built around service, country, and freedom.”

Military service dogs provide comfort and companionship to our troops, detect explosive devices, carry out life-saving tasks, search areas that cannot be accessed by soldiers themselves, do sentry and scout work, and even shield soldiers from flying bullets. Just as soldiers do, these dogs get injured and are even killed in combat, and many suffer emotional and psychological consequences of war, such as PTSD.