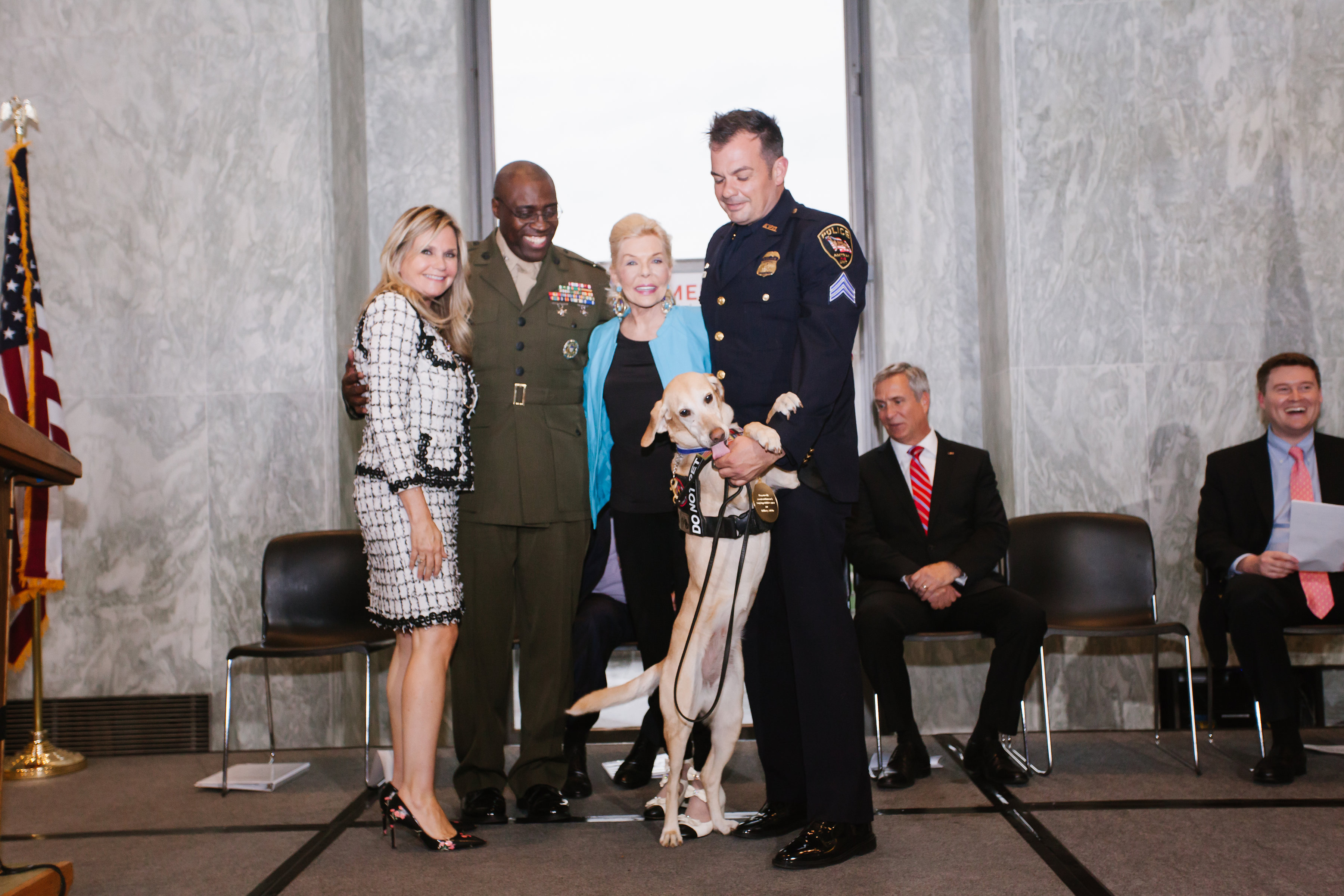 Posted at 12:06h in News by lifeadmin

Philanthropist and veterans advocate Lois Pope shook a lot of hands – and, more importantly, paws – as she presented four heroic military dogs with the nation’s highest honor for canine service to our country in a special ceremony on Capitol Hill on Tuesday, May 23.

With top military leaders and 200 members of Congress and Congressional staff looking on, Mrs. Pope, together with U.S. Navy Rear Admiral Thomas Kearney (Ret.) and U.S. Marine Corps Colonel Zachary White, bestowed on the courageous canines the 2018 American Humane Lois Pope K-9 Medal of Courage.  The medals are presented annually to a select few outstanding military dogs for their extraordinary valor and service.  They were conceived of by Mrs. Pope and created under the aegis of American Humane, the country’s first national humane organization, which has worked with the U.S. military for 100 years.

“These remarkable dogs have given us their best.  They have put their own lives on the line to protect us, to defend us, and to save us,” said Mrs. Pope, who also conceived and spearheaded the American Veterans Disabled for Life Memorial, which was dedicated in Washington D.C. in October 2014 as the nation’s first and only permanent public tribute to the four million living disabled American veterans and all those who have died.  “Working side-by-side with the men and women of our Armed Forces while putting their own lives on the line for our country, these dogs have taken loyalty to a whole new level through their service and, by doing so, have saved countless thousands of lives.  Today is the perfect time to properly recognize their valiant sacrifices and contributions to our nation at the highest levels.”

“Soldiers have been relying on these four-footed comrades-in-arms since the beginning of organized warfare and today military dogs are more important than ever in keeping our service men and women safe,” said American Humane President and CEO Dr. Robin Ganzert. “At American Humane, which has been working with the U.S. military and military animals for 100 years, we feel it is time to recognize and honor the extraordinary feats and acts of devotion these heroic animals perform every day.”

Jag
Specialized Search Dog Jag met Army Sergeant Dennis Dow more than a decade ago, when they were paired
together on the first day of training. With Sergeant Dow at his side, Jag learned to detect deadly explosive
devices and identify other threats to his platoon. The pair deployed to Afghanistan and Germany, where Jag
worked to locate lethal bombs and other security threats. On their very first mission together, Jag sniffed out a
hidden weapons cache of deadly artillery rounds, alerting Dow of the immediate danger. His tireless bravery
and keen sense of detection was put to the test during thousands of searches and hundreds of missions… but
Jag tirelessly defended his fellow comrades. Jag, now twelve, retired after seven years of courageous military
service—that’s almost five decades in dog years. Sergeant Dow, who is now retired, adopted his best friend and
today the pair volunteer at their local fire department, helping provide comfort to the community after fires and
other tragic incidents.

Taba
Taba is a nine-year-old Dutch Shepherd who served with the U.S. Army’s Special Forces Group 10
as a Multi-Purpose Canine specializing in explosives detection, patrol, and tracking during her two years of
service. Taba was adept at locating deadly IEDs and bravely participated in many dangerous raids during her
deployment to Afghanistan, saving an unknown number of lives.  After Taba returned from service, she was
adopted by a former K-9 police dog handler and his family. As the family helped Taba adjust to retirement, a
previous injury in her rear leg began to flare up, eventually requiring amputation. Taba is healing from the
recent surgery and this warrior is now living out the rest of her days free of pain, just as she deserves.

Taker
Taker is a 12-year-old Labrador Retriever who served with United States Marine Corps Sergeant
Kevin Zuniga in Iraq and in Afghanistan during Operation Enduring Freedom where he worked as an
Explosives-Detection Dog. During that time, he saved uncounted lives while risking his own under harsh
environmental and psychological conditions. Taker is retired from military service, but he continues to serve in
another capacity. He now acts as a life-changing service dog, helping his longtime Battle Buddy cope with
Post-Traumatic Stress, which affects so many of our brave warriors. In so many ways, a war dog truly is a
warrior’s best friend.

Summer
Explosives Specialized Search Dog Summer is a seven-year-old Labrador Retriever who courageously served
with the U.S. Marines Corps, conducting routine patrols, finding numerous weapon caches and IEDs, clearing
routes and coming under fire several times during her years of service. Summer never stopped serving her
country. Summer retired from the military but continues her selfless dedication to protecting our country. Today, she works as a member of a TSA K-9 team for the Amtrak Police Department in Washington, D.C., with her partner, retired U.S. Air Force Sergeant Micah Jones. The inseparable pair has provided coverage and security for VIPs and foreign dignitaries and works each day to play a vital role in the war against terrorism.

About Lois Pope, The Lois Pope LIFE Foundation, Inc., and LIFE (Leaders in Furthering Education)
As one of America’s leading philanthropists, Lois Pope has positively impacted the lives of individuals at the local, national and international levels.  She has established three separate organizations dedicated to helping those in need.  These organizations are the Lois Pope LIFE Foundation, Inc., Leaders In Furthering Education (LIFE), and the Disabled Veterans’ LIFE Memorial Foundation.  For more than 20 years she has been the driving force behind the Lois Pope LIFE Center at the University of Miami School of Medicine, The American Veterans Disabled for Life Memorial, and a groundbreaking new program with American Humane in Palm Beach County. Lois Pope has recently donated several Lois Pope Rescue Vehicles. Each rescue vehicle is a 50-foot long response unit, complete with a Ford F-350 truck and trailer, which is specifically designed and outfitted to provide an array of animal emergency services and cruelty responses within the region.

On October 5, 2014, Mrs. Pope saw the completion of a decades-long dream – the American Veterans Disabled for Life Memorial, which was dedicated by President Obama in Washington DC.  It will stand in perpetuity as a reminder to the public and legislators of the courage and sacrifices of the four million-plus living disabled veterans and all those who died before them, as well as the need to be vigilant in assuring their support and understanding the human cost of war.  Through her advocacy, October 5 every year will serve as a National Day of Honor for disabled veterans.

About American Humane
American Humane is the country’s first national humane organization, founded in 1877. They began working
with the American military in 1916 when the U.S. Secretary of War requested they help rescue some 68,000
wounded war horses each month on the battlefields of World War I Europe. Following World War II, American
Humane helped pioneer the use of animal-assisted therapy to aid returning veterans. Today, through its Lois
Pope LIFE Center for Military Affairs, the organization works to help active-duty members of the military and
military animals. For more information, please visit www.AmericanHumane.org.