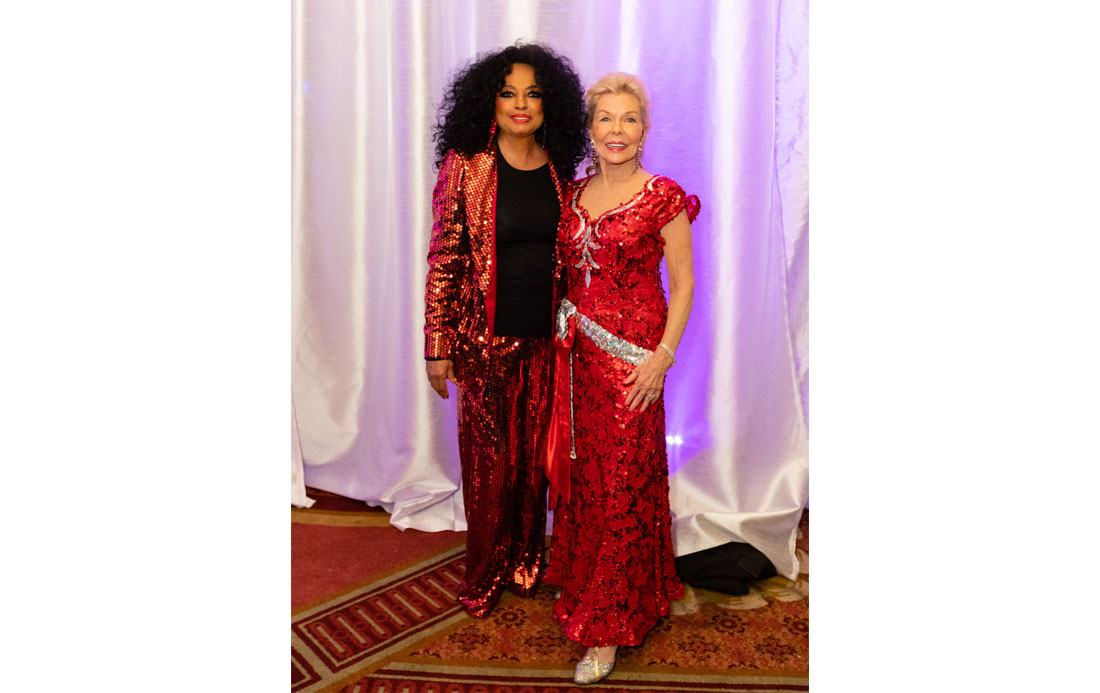 Posted at 09:46h in News by lifeadmin

Palm Beach, FL – A record attendance of nearly 700 people filled the dance floor – and, in fact, all open parts of the entire Ponce de Leon Ballroom floor – singing and swaying as the legendary Rock and Roll Hall of Fame singer Diana Ross performed some of her greatest hits.  A little while later, the same capacity crowd was rolling in their seats with laughter as Las Vegas superstar comedian Rita Rudner delivered side-splitting one-liner after one-liner.  And then everyone was back on their feet dancing the night away to the tunes of the Danny Beck Band.

All this, and more, helped make the 25th Silver Jubilee Lady in Red Gala sponsored by Lois Pope and LIFE, Leaders in Furthering Education, on Friday, January 4, 2019 at The Breakers “one Supremely Golden affair,” exclaimed Mrs. Pope, who created the gala and served as the evening’s host.

“What a history-making night!,” she added. “I remember that at our first Lady in Red, we hand-made all our centerpieces.  They were very impressive.  But tonight goes beyond just impressive.  It was simply Wow!”

And speaking of “Wow,” the event raised more than $1 million and benefitted disabled veterans through the “Pups4Patriots” program at the Lois Pope LIFE Center for Military Affairs at American Humane.  This unique program takes dogs languishing in shelters and provides them with special training so that they can be partnered free of charge with disabled veterans as therapy dogs.

Over the past 25 years, the Lady in Red gala – traditionally one of the highlights of the Palm Beach social and philanthropic season — has resulted in other historic achievements, including the building of the American Veterans Disabled for Life Memorial, the nation’s first and only permanent public tribute to the more than four million living disabled American veterans and all those who died.

Among their many other accomplishments, Mrs. Pope and LIFE have also sent more than 25,000 disadvantaged Florida children to summer camp; provided college scholarships to young men and women seeking to pursue careers in public health;  built a clean water system in a Guatemalan village destroyed by a hurricane; provided the means for Sudanese women to flee genocide; donated three tractor-trailers for American Humane’s Red Star Rescue program that shelters and provides medical treatment to dogs, cats and other animals lost, abandoned or displaced by natural disasters and severe abuse situations; created the Lois Pope LIFE Center at the University of Miami Miller School of Medicine to house the Miami Project/Buoniconti Fund to Cure Paralysis, the world’s leading center for paralysis research; championed the designation of October 5 to be an annual National Day of Honor for disabled veterans; and advocated for national legislation that enables military dogs to be brought home from the front lines and then reunited with their human service member handlers.

Most recently, Mrs. Pope made another history-making gift – the largest ever to the Bascom Palmer Eye Institute to establish the Lois Pope Center for Retinal & Macular Degeneration Research at the Institute’s Palm Beach Gardens campus.

So there was much to celebrate at this year’s Lady in Red.  And what a celebration it was – from the entertainment to the food to the decorations.  When guests arrived for cocktails, they were serenaded by the Palm Beach Symphony in The Breakers’ Venetian Room.  In keeping with the Lady in Red theme, the room was decorated in red.  Then guests moved into the Ponce de Leon Ballroom, which highlighted the Silver Jubilee theme and was adorned with white flowers accented with silver and gold.

Will and Anthony Nunziata, the super-popular twin songsters, served as auctioneers, offering up exclusive items from Tiffany & Co. and exotic vacation locales during the live auction.

As one of America’s leading philanthropists, Lois Pope has positively impacted the lives of individuals at the local, national and international levels.  She has established three different organizations dedicated to helping those in need – those who are disadvantaged, marginalized, or forgotten because of disabilities, socio-economic status, neglect, age, abuse, and other barriers.  They are the Lois Pope LIFE Foundation, Leaders in Furthering Education (LIFE), and the Disabled Veterans LIFE Memorial Foundation.  Over the past quarter-century, she has been the driving force behind the Lois Pope LIFE Center at the University of Miami School of Medicine; a summer camp program serving thousands of disadvantaged children in Florida; a scholarship program for low-income students of enormous potential who desired to attend medical school and then go back to serve in their home communities; a program offering researchers with the means to pursue cutting-edge work in finding cures for terrible diseases; a clean water system in a Guatemalan village; an effort to aid refugee women in Sudan; an initiative that has resulted in nearly a dozen ambulances in Israel; and numerous partnerships with American Humane to expand rescue operations for dogs (cats and other animals)  victimized by natural disasters and horrific abuse, as well as those who have fought alongside human soldiers on the front lines of Iraq and Afghanistan.  Most recently, she made a $12 million gift to establish the Lois Pope Center for Retinal and Macular Degeneration Research at the Bascom Palmer Eye Institute’s Palm Beach Gardens campus, the largest donation ever to the institute.  She has also produced two documentaries with award-winning director Ric Burns highlighting the plights of disabled veterans in the U.S. “Debt of Honor” and “VA: The Human Cost of War.”