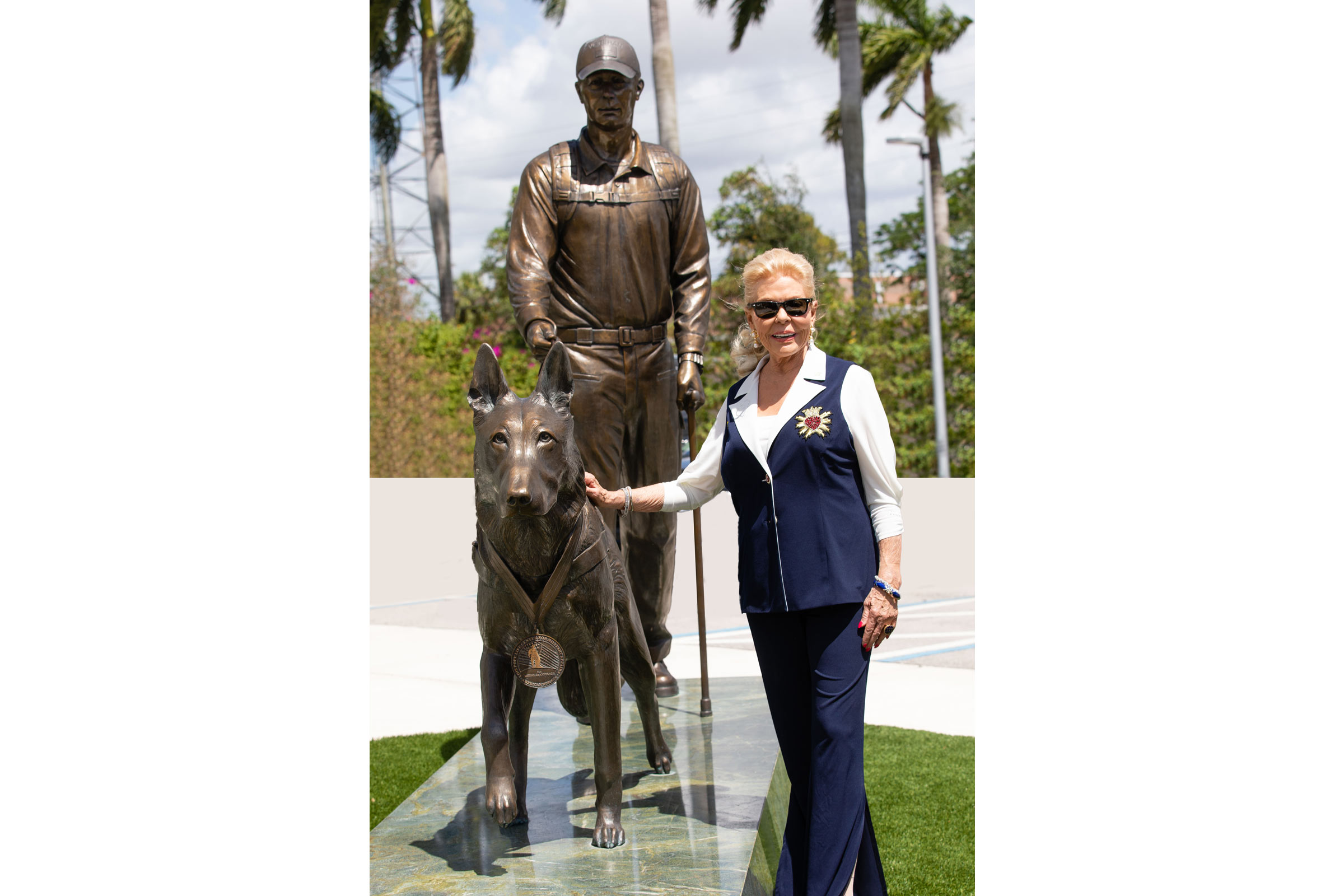 Posted at 13:32h in News by lifeadmin

“What’s in a name” asked the prolific playwright William Shakespeare.

Palm Beach County elementary and middle school students have the chance to answer this question by naming the dog featured on the American Military Hero Dog Monument and win $2500 for themselves and their schools in the process.

Indeed, Manalapan-based philanthropist and humanitarian Lois Pope announced today that in conjunction with the Palm Beach County School District, she is launching a district-wide art and video contest to name the monument’s dog.

Located at Tri-County Animal Rescue in Boca Raton, the monument – which Mrs. Pope conceived and then commissioned in conjunction with American Humane – celebrates the unbreakable bond between the thousands of heroic dogs and the valiant human warriors who have served alongside each other in our Armed Forces, from the Civil War through today. Some 2,700 dogs are currently engaged in active military service.

These courageous canines do so much: they carry out lifesaving missions; detect explosive devices; search areas that their human handlers cannot get into, and provide companionship, not just in war but long after the battle is over.

“Yet, these military working dogs do not get the recognition they so well deserve,” Mrs. Pope said. “It is my hope that with this contest – by naming the courageous canine on the American Military Hero Dog Monument – that we remember there are heroes at both ends of the leash,” said Mrs. Pope, who also conceived and spearheaded the building of the American Veterans Disabled for Life Memorial in Washington DC, the nation’s only permanent public tribute to the four million-plus living American disabled veterans and all those who have died.

“As a military mom, an animal lover, and an educator, I am excited to share this opportunity with our students. They will use their creativity and talent to bring awareness to an important cause,” said Diana Fedderman, Assistant Superintendent of Teaching and Learning for the school district.

The genesis for the naming contest started with a conversation Mrs. Pope had with Dr. Robin Ganzert, president and CEO of American Humane, about how to honor military working dogs. That conversation led to the creation of the K9 Medal of Courage, the highest honor for dogs performing exceptional service in the five branches of the military. The awards are presented annually in a ceremony on Capitol Hill in Washington DC.

Still, Mrs. Pope felt more needed to be done; “we also needed a permanent monument to recognize the four-legged heroes of the past, present and future. Robin quickly agreed and thus was born the American Military Hero Dog Monument.” The monument was dedicated earlier this year.

The natural next step is the dog naming contest. Children in the various elementary and middle schools throughout the district are being asked to create either a piece of art or a very brief video offering the name they feel is most appropriate for the monument dog, and why they chose that name.

Then the judging team – comprising the monument sculptor Austin Weishel; Robert C. Miller, a Board member of the Lois Pope LIFE Foundation; Dr. Ganzert; Ms. Fedderman, and Mrs. Pope – will select two winners, one from elementary school and one from middle school. The two winning students will each receive $2500 and the schools where they attend will each receive the same amount.

The contest launches on September 9, and the last day to enter is October 4. There is one submission per student, no submissions with political or religious themes will be accepted, and all submissions must be sent / uploaded to the designated landing page: https://loispope.nationbuilder.com/herodog

The winners will be announced the week of October 18. Appropriately, they will be celebrated in a luncheon ceremony at Tri-County Animal Rescue on November 11, Veterans Day — the day America pays tribute to the men and women who have donned the uniforms of the nation’s military branches and who served and sacrificed to defend and preserve the freedoms we all enjoy and cherish.