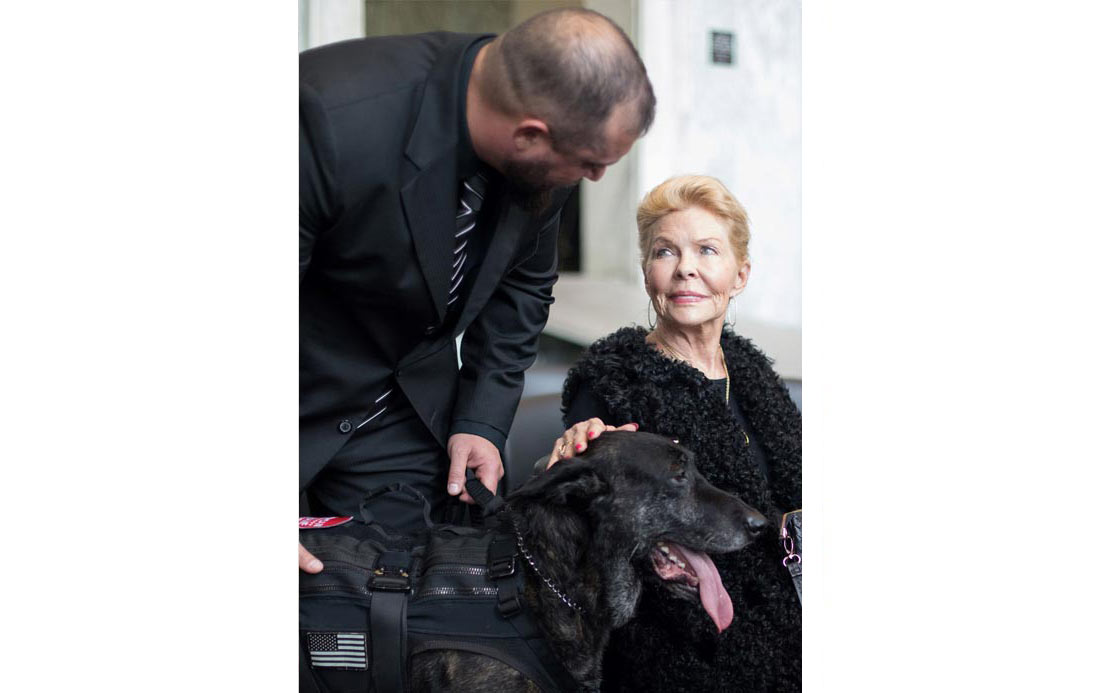 Posted at 12:51h in News by lifeadmin

On eve of September 11, country recognizes courageous canines assisting in the war on terror

A brave black Lab who was wounded in action while uncovering IEDs in Afghanistan; an intrepid Dutch Shepherd who helped safely evacuate a critically injured soldier; a four-footed warrior who undertook 600 missions for the U.S. Department of State; and an Improvised Explosive Device Detector dog who protected those who protect us at the Pentagon have all been chosen as the 2019 recipients of American Humane’s Lois Pope K-9 Medal of Courage.

The awards, presented at a Capitol Hill ceremony this week, are the nation’s highest honor for military working dogs for extraordinary valor and service to America.  They were created under the aegis of American Humane, which has worked with the U.S. military for more than 100 years, and internationally renowned philanthropist and veterans advocate Lois Pope.

A dozen members of Congress and hundreds of congressional staffers attended the packed event.

“I’d like to thank everyone for joining us as we honor some of our bravest, most courageous heroes,” said Rep. Gus Bilirakis, co-chair of the Congressional Humane Bond Caucus, which hosted the event. “By helping locate enemy positions, engage the enemy, and sniff out deadly IEDs and hidden weapons, military dogs have saved countless lives in the fight for freedom. I consider it a moral responsibility to support America’s veterans and military working dogs, both during their service and in retirement.”

“Military working dogs are invaluable members of their units,” said Rep. Henry Cuellar, co-chair of the Congressional Humane Bond Caucus. “Their deeds deserve recognition, their names deserve to be heard, and their service remembered.”

“I cannot think of a better reason for all of us to come together – whether we are Democrats or Republicans or Independents….whether we are civilians or in the military or are veterans….than to honor courageous canines who have served in the Army, Navy, Air Force, Marines, Coast Guard or National Guard,” said internationally renowned philanthropist and veterans’ advocate Lois Pope. “My thanks to all the members of Congress and leaders of the Armed Services branches who have taken time from their extremely busy schedules to join us.”

“Military dogs are vital to protecting those who protect our freedom,” said American Humane President and CEO Robin Ganzert, PhD. “At American Humane, which has been supporting the U.S. military and military animals for over 100 years, we believe it is important to recognize and honor the extraordinary feats and acts of devotion these heroic animals perform every day.”

During a 2012 deployment to Afghanistan, MWD Troll and his handler, then-Air Force Staff Sergeant Robert Wilson, conducted 89 combat missions, logging 1,240 hours, supporting United States Army and Special Operations units outside the wire. During a four-day air assault mission, Troll was tasked with clearing routes of Improvised Explosive Devices (IEDs) and conducting a raid on an insurgent compound. During the eight-kilometer movement, Troll located three IEDs, saving 65 Coalition Forces members. Upon reaching the compound, Troll executed a sweep detecting buried IEDs, and a concealed tunnel containing nine pressure plates, six AK-47s, 20 pounds of homemade explosives and two high-value targets known to have conducted attacks on Coalition Forces. Once secure, they exited the compound with an Afghanistan National Army (ANA) soldier and immediately came under fire. The ANA soldier was critically wounded, and Wilson and Troll facilitated his immediate evacuation. Wilson returned fire and moved with Troll to a position of cover as they were directly targeted and engaged by insurgents. They were then tasked to clear a landing zone for a Medevac helicopter. They moved into the open with a four-man security element, exposing themselves to grave and imminent danger while clearing the landing zone of IEDs and maneuvering to engage the insurgent location. Their quick reaction to enemy fire, and their gallant actions resulted in the elimination of insurgent threats. Furthermore, Troll’s courageous actions allowed for the safe and secure arrival of the Medevac and the rapid evacuation of the critically injured soldier from the battlefield. This 12-year-old Dutch Shepherd is a hero.

Sergeant Yeager is a 13-year-old black Lab who honorably performed combat tours in Iraq and Afghanistan as an Improvised Explosive Detection Dog with the United States Marine Corps. Sgt. Yeager has been credited with detecting the locations of dozens of explosive devices. During his three combat tours, Sgt. Yeager participated in over 100 patrols, and was tasked with clearing routes for his fellow Marines. On April 12, 2012, Sgt. Yeager suffered shrapnel wounds from an IED that caused him to lose part of his ear. He was awarded the Purple Heart for his injuries. Unfortunately, the same explosion took the life of his handler, Lance Corporal Abraham Tarwoe. The pair was trying to protect the other Marines in the 2nd Battalion, 9th Marine Regiment in the Helmand Province of Afghanistan. Fellow Marines attest to the unbreakable bond between Tarwoe and Sgt. Yeager. After the attack, Sgt. Yeager was transported back to the U.S. and treated for his injuries until he was stable enough to retire from the USMC. Lance Corporal Tarwoe’s widow was unable to adopt Sgt. Yeager as she would now be raising their infant son alone. Sgt. Yeager was adopted by another Marine Corps family. Today, Sgt. Yeager is beginning to show signs of aging, though his spirit is undiminished. Despite his trials and witnessing acts of terrorism, Yeager remains a sweet dog with an infinitely joyful disposition. He has settled in North Carolina with his family, where he is an ambassador for the Project K-9 Hero Foundation.

K-9 Niko is a 10-year-old Dutch Shepherd who worked all over Afghanistan protecting foreign and U.S. dignitaries, embassy personnel including the U.S. Ambassador, and visiting U.S Presidential and Secretary of State details from 2012 to 2016 – never leaving the country until he retired. K-9 Niko was trained in North Carolina and was subsequently deployed to Afghanistan, where he conducted more than 600 missions for the U.S. Department of State in support of Department of Defense, the Central Intelligence Agency, the United States Agency for International Development, and other alliance of countries that are a part of NATO. During Niko’s career, he assisted with route clearance for advance teams, open area and house-to-house sweeps prior to high-level meetings, and the endless searching of support vehicles that came into camp. He also flew around the country in helicopters, clearing the way for U.S diplomacy.

When Niko was not finding bombs, he spent his down time lifting the spirits and morale of his teammates. He was a familiar face in the gym. When working out with his handlers and teammates, you could always find him running on the treadmill. Niko worked hard, risking his life to ensure that everyone he worked with returned home to their families and never taking a vacation during his career. K-9 Niko is living out the rest of his years on the Alaska frontier, running free and living a new chapter in the book of his life.

MWD Emmie served with the U.S. Marine Corps during Operation Enduring Freedom. This 12-year-old black Lab completed three tours in Afghanistan from 2009-2012. As an IED Detector Dog Emmie worked primarily off-leash along roadways with a different handler for each of her three tours. Her last handler said that she was a high-drive dog, stubborn at times, who never stopped working. K-9 Emmie came to Pentagon in December of 2012. She would now work primarily on-leash and be tasked to search vehicles, buildings and open areas. Emmie breezed through training and in February of 2013, Emmie and Eric Harris were certified as a Pentagon Police Explosive Detector Dog team. Emmie would search hundreds of cars and perform random sweeps of parking lots. She and Harris were regularly assigned to conduct sweeps for high ranking dignitaries in the Washington, D.C., Maryland and Virginia areas. Emmie participated in numerous canine demonstrations at federal facilities including “Bring Your Child to Work Day” at the Pentagon and “Career Day” at local schools. Two highlights of her career at the PFPA include having an article written about her in The Shield magazine and being interviewed on CNN about her transitioning from the Marine Corps to working at the Pentagon. In 2018, K-9 Emmie retired in from PFPA. Her job now is helping Eric Harris’ autistic son, something she started doing on her own. As Harris says: “I guess her old handler was right. She never stops working.”

American Humane, the country’s first national humane organization, has worked with the U.S. military to support veterans and military animals for more than 100 years, starting in 1916 when we worked to rescue 68,000 war horses wounded each month on the battlefields of World War I Europe. Since then, the group helped pioneer the use of animal therapy for veterans, reunites retired war dogs with their handlers, rescues animals in need of forever homes and trains them as lifesaving service dogs for veterans with PTS and Traumatic Brain Injury, and much more. American Humane’s Lois Pope LIFE K-9 Medal of Courage was created in 2016 to recognize and honor the extraordinary sacrifice and feats of valor that America’s K-9s perform to keep us, our troops, and our country safe. For more information about American Humane and its mission, please visit: www.AmericanHumane.org.

As one of America’s leading philanthropists, Lois Pope has positively impacted the lives of individuals at the local, national and international levels.  She has established three separate organizations dedicated to helping those in need.  These organizations are the Lois Pope LIFE Foundation, Inc., Leaders In Furthering Education (LIFE), and the Disabled Veterans’ LIFE Memorial Foundation.  For more than 20 years she has been the driving force behind the Lois Pope LIFE Center at the University of Miami School of Medicine, The American Veterans Disabled for Life Memorial, and a groundbreaking new program with American Humane in Palm Beach County. Lois Pope has recently donated several Lois Pope Rescue Vehicles. Each rescue vehicle is a 50-foot long response unit, complete with a Ford F-350 truck and trailer, which is specifically designed and outfitted to provide an array of animal emergency services and cruelty responses within the region.

On Oct. 5, 2014, Mrs. Pope saw the completion of a decades-long dream – the American Veterans Disabled for Life Memorial, which was dedicated by President Obama in Washington DC.  It will stand in perpetuity as a reminder to the public and legislators of the courage and sacrifices of the four million-plus living disabled veterans and all those who died before them, as well as the need to be vigilant in assuring their support and understanding the human cost of war.  Through her advocacy, October 5 every year will serve as a National Day of Honor for disabled veterans.